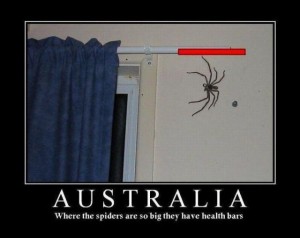 This is a post I wrote for the internal Spotify blog, it describes my journey from Sydney, Australia to Stockholm, Sweden. Hej Spotify, my name is Brendan and I’ve recently moved to Stockholm to work for Spotify as an Agile Coach in the Infrastructure / Operations tribe. I was born & raised in Perth, Western Australia and I moved here recently from Sydney, New South Wales. After my bootcamp (team uranus) concluded, People Operations asked if someone could write about their experience as a new staff member. This is my story 🙂

Around late last year, I read an article from Henrik Kniberg & Anders Ivarsson – “Scaling Agile @ Spotify“. At the time, I was working hard at transforming my organisation to be more agile, to shift from a Scrum shop to a greater appreciation of what it means to be agile, both as a way of thinking, a way of doing & a way of being. I was reading books that have had an influence on Spotify’s agile culture, such as The Lean Startup & Coaching Agile Teams by Lyssa Adkins. At the time, this article was inspiring & interesting, but nothing more (yet).

A few months later, I was listening to Spotify (ad-supported) and I heard an advertisement… “Come and work for Spotify” it said. This subconsciously stuck in the back of my mind, but I didn’t act on it. A few weeks later, I started thinking about where I want to be in my career in 1 year. I decided that I want to work for a company that not only understood Agile, but put their money where their mouth is & put in the effort needed to foster an agile culture. I wanted to work on a product that I liked, used & advocated. I wanted to work for the BEST company in the world when it comes to the agile way of being & building an amazing product. And then it happened, the Spotify advertisement played in my head & I remembered the article. It was obvious what I needed to do next.

I dusted the cobwebs off my resume and took the plunge; I had never been to Europe, let alone Sweden. I knew almost nothing about Sweden, but I knew that I wanted to work for Spotify. (And living/travelling in Europe was definitely a plus) So I applied and got a response back fairly quickly. The interview process however, was SLOW (I applied in Feb!), which is definitely something I am not used to. One thing I did appreciate was that I was being interviewed by Agile Coaches – they speak my language! (not ‘managers’) The interviews were great, they were open discussions, there was no right or wrong answer & everything I said was “interesting”… What did this mean!?!? Did this mean I was left of field? Was this their polite way of saying “pfft he’s full of crap”? But somehow I kept getting asked back for interviews, so it couldn’t have been all bad!

So after a good 5 months or so of solid anticipation, Skype interviews, some time zone misunderstandings & some Skype interviews that just didn’t work (Gotta love Australia’s internet), I was asked to come to Sweden for my final, half day interview… I did what I felt was the right thing, I told my employer the honest truth & asked for some time off, which I got. My flights were booked (British Airways with a short lay-over in London).

Unfortunately this didn’t go according to plan, my interview was pushed back and my flights went from a manageable short layover in London with British Airways, to Air China and 8 hours of layover hell in Beijing. Don’t speak Chinese? Bad luck. Want to buy something simple like a toothbrush? Pfft forget it.

Although the interview went well & was enjoyable, the flights & layovers (totalling more time than the actual time spent in Stockholm) was not. We’re a very flexible business, but our policies towards travel & relocation, particularly in atypical circumstances, feel too stringent. I was exhausted & very ill by the time I got home, I could have been happy, excited & looking to the future! But I digress.

So I went home, worked my notice period of 4 weeks & spent 3 weeks in sunny Perth, Western Australia. (It was summer in Stockholm & winter in Perth, however the temperature in both was the same…) I eventually made it here and spent a week exploring Stockholm, getting over jetlag and settling in – the weather was fantastic! As the week went on I started to get a bit bored, but Martin (my Spotify ‘Buddy’) called me up and invited me to lunch on the Thursday & AW (after-work) beers on the Friday, which was awesome as I was really hanging out to meet some people! After the AW, a group of developers invited me out to Karaoke, which was an awesome icebreaker. Also in this week, I went to the Tax Office and was told that I don’t exist, that was fun.

My first week at Spotify was awesome. I buddied up with Martin to coach the bootcamp & soaked in my surroundings. A few observations about my first week:

The next few weeks were fun, challenging & tiresome. In 3 weeks, I’ve:

Stuff changes here a LOT, but we all think (hope) it’s for the best. And if it doesn’t work out? Then we change it again. (We Agile Coaches call this Continuous Improvement). I thought I was going to be bored and have a hard time meeting people. I was wrong. Thanks everyone for being so welcoming & see you all later for a bear or two.