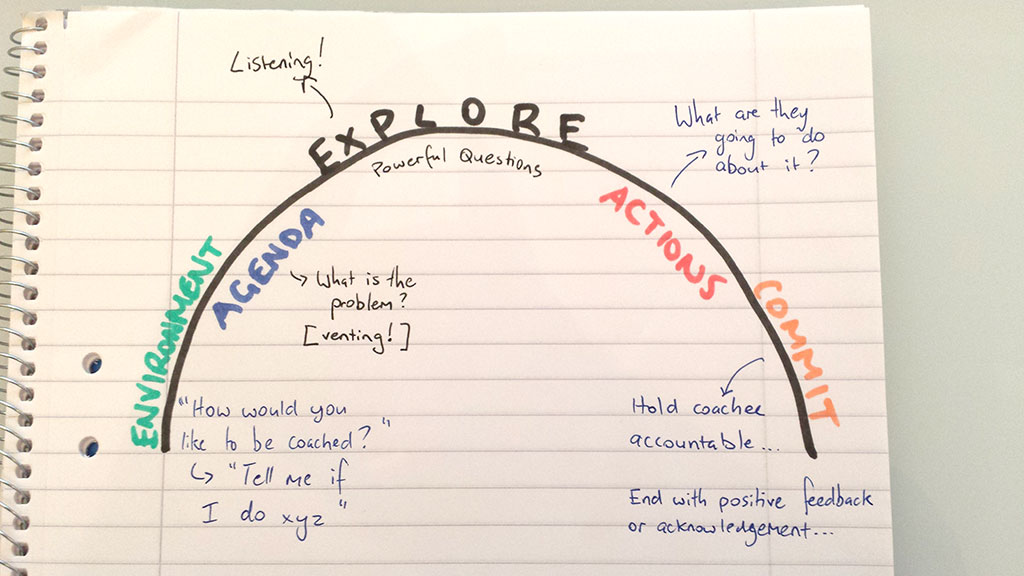 Today I participated in Day 1 of the Coaching Agile Teams course. The course trainers were Lyssa Adkins (known for authoring “Coaching Agile Teams” – a fantastic book) and Michael Spayd. This article is a brief summary of my learnings from Day 1.

Listening is HARD!
I haven’t always been the best listener & this is something that I have been working to improve over the years. Firstly, we were introduced to the different levels of listening: In our exercise, we took it to the extreme and listened to our partner talk for 3 minutes without a single interruption or question. We also had to make mental notes of when we were in the various levels of listening, then discuss it afterwards:

For me, my brain was trying to pre-empt what my partner was going to say next, then mentally I would tell myself “Shutup and listen!” to attempt to revert back to Level 2. (it worked!) We didn’t really touch on Level 3, so I’m guessing we’ll cover it in the next 2 days.

Teaching Modes help to identify (and hopefully improve) your method of teaching
We learnt the differences between teaching modes & it gave me a guideline to question myself when conducting some sort of training: “Am I merely a Sage on the Stage?” Naturally I want to maximise the effectiveness of the time that team members spend being trained by me, so here is a nifty guide to refer to, when structuring a workshop or training: Frame Changes lift the energy of the room
Also, regardless of the training mode, we learnt the importance of changing the frame of the interaction, such as grouping people in pairs, triads, small grounds etc or sitting vs standing, thinking vs doing and so on.

Impact Feedback is a great way to give feedback
One very valuable piece of today’s workshop was “Impact Feedback”, something that I had not heard of before but I found very interesting & useful. Agile Coaches talk a lot about feedback, but here we covered how to give feedback in the most constructive, useful manner.

The concept of Impact Feedback is to relay the impact of what someone said / did in a way that explains your mindset at the time it occured, which can be positive or constructive. Lyssa gave an 8 minute whiteboard talk about Scrum, to which Michael then gave 2 kinds of feedback:

Lyssa had linked to this Google Doc, however it was in her trash, so I created a new one:
Powerful Questions for Agile Teams

The Coaching Arc
I finally got to learn the Coaching Arc, which I’m sure we’ll go over more in the coming days. It was great to have a bit of structure to the process of Coaching. Seeing Michael coach one of the attendees was great, albeit a bit unfortunate when the attendee told us afterwards that her story was made up 🙁